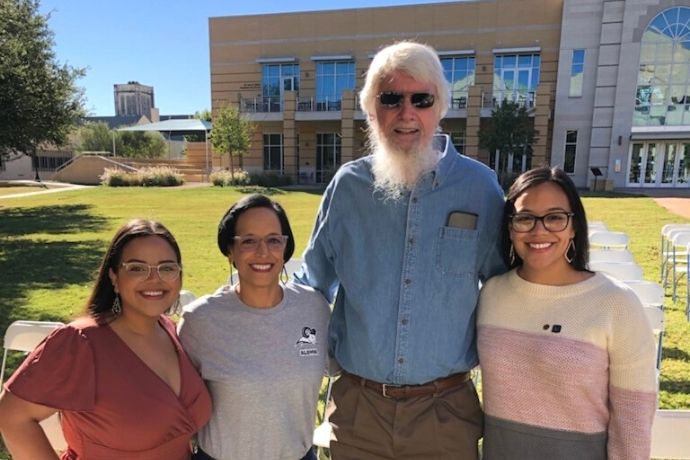 Attending a university can be a truly transformative and foundational part of a person’s life. Texas Wesleyan stands out from other universities in the area largely because of its commitment to continually to make a positive impact in the community, its “Smaller. Smarter.” classroom sizes and the incredible faculty and staff. When students attend TXWES, their lives are positively impacted for generations to come. This is clearly illustrated in the experience of the Cedillo family with beloved TXWES professor, Dr. Ronnie McManus.

Current TXWES student Kennedy Cedillo reached out to the alumni office to share a photograph of Dr. McManus and her family standing together at the recent Brick Dedication ceremony. This moment was so significant for the Cedillo’s as “Dr. McManus has been a part of each of [their] lives during [their] time at TXWES.”

Kennedy’s mother, Alice ’96 ’08, sought to attend Texas Wesleyan because the idea of being known only as a ‘number’ and not a student in a classroom at a larger school scared her. At TXWES, all of her professors knew her name and were caring and considerate, but none more so than Dr. McManus. Alice married Jerry Cedillo ’00 and had their first daughter, Andrea, while attending Texas Wesleyan. With the full support of University faculty and staff, she took a semester off before returning to campus as a full-time mom and student. “Balancing the two was challenging,” Alice recalls.

In one instance, Alice was unable to secure childcare for her daughter so that she could take her Old Testament final exam. “I called Dr. McManus to explain the situation,” and he immediately responded by suggesting that Alice should bring baby Andrea with her to class and take the exam in the hallway. “[Andrea] wound up staying asleep for most of the exam, so I stayed in the classroom. She woke up before I was finished and Dr. McManus gently carried her to the hallway and held her until I was done.”

When it came time for Alice to graduate in the spring of 1996, she selected Dr. McManus for the robing ceremony. “It was my honor to choose him,” says Alice. “He had the most impact and was most influential on the person I would become.”

20 years later, Andrea would return to Texas Wesleyan as a student to take Dr. McManus’ class, describing him as being “the sweetest man alive.” He had not changed and Andrea felt the same respect and admiration for her professor as her mother before her. Andrea graduated from Texas Wesleyan University in 2016.

When it was Kennedy’s time to attend TXWES, she took an ethics class with none other than Dr. McManus. She reflects fondly on that class and enjoyed every second of her time learning from the professor that has also taught her mother and sister before her. “I thought it would be nice to share this photo and our story behind Dr. McManus’ impact on multiple generations, just like ours,” says Kennedy, who will graduate in the spring of 2022.

Dr. Ronnie McManus, who recently retired in 2021, is thankful for the role he has been able to play in helping students like the Cedillo’s achieve their educational goals. When asked about his experience with instructing different generations at TXWES, Dr. McManus said that it was a joy to connect with students across generations and learn their similarities and differences. For Dr. McManus, the most rewarding part of being a professor at Texas Wesleyan was establishing “good teacher/student rapport and communication. This allowed us to learn from each other.” He hopes that his former students will be lifetime critical thinkers and seek to continually grow.

Alice has found joy in knowing that her hero, Dr. McManus, was as much a part of her daughters’ lives as he was hers. She was so happy to attend the Brick Dedication Ceremony, where the picture of her family and beloved TXWES professor was taken as they honored his retirement after nearly 50 years.

The friends, faculty and staff at Texas Wesleyan are “life changers,” according to Alice. She does not believe her family’s story is one of a kind, but that there are “hundreds, if not thousands, of stories like this to be told about the heart and soul of Texas Wesleyan University.”

To those that are considering this University, Alice encourages to “Do it! Move forward. Make it happen. Write a story of your own that you can share with future generations about how being part of the RAMily was one of the greatest experiences of your life.”