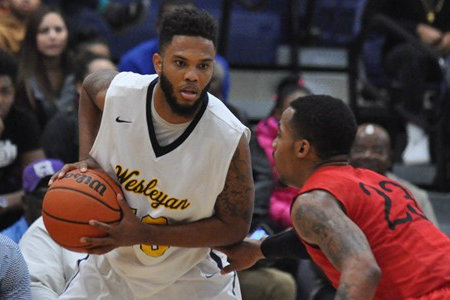 The National Association of Intercollegiate Athletics (NAIA) has released the 6th regular season edition of its Division I Coaches' Poll and with a No. 9 ranking, the Rams have cracked the top-10 for the first time since 2011.

The NAIA also announced that Texas Wesleyan's Jerell Ellis has been selected as the NAIA Division I Men's Basketball National Player of the Week for his performance during the period of January 25-31.

Ellis' performance last week paced the Rams to a pair of wins over nationally-ranked opponents. The Rams beat No. 20 Southwestern Assemblies of God University 84-76 and then No. 7 Mid-America Christian University 91-71. That vaulted Texas Wesleyan to the top of the Sooner Athletic Conference (SAC) standings at 8-2 and moved the team to 17-4 overall.

The Rams will return to action on Thursday, when they travel to Chickasha, Okla., to take on the University of Science & Arts (OK).

The team returns to the Sid Richardson Campus Center for Homecoming on Saturday, Feb. 6 to host Southwestern Christian University.