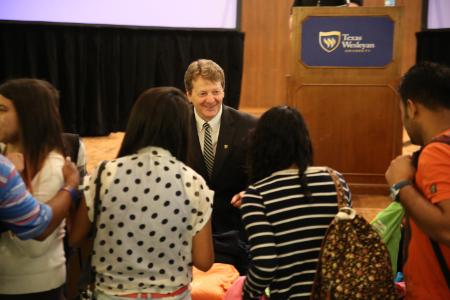 The TV commercials, which hit the air in the Dallas-Fort Worth market Sept. 1 and will run through the first week of November, evolve Texas Wesleyan's popular "Smaller. Smarter." message while retaining key elements of previous campaigns.

The campaign is present in the billboard, TV, digital and movie theater markets. The second flight of the campaign begins during the spring semester.

"Over the past two years," Slabach said, "we've seen 'Smaller. Smarter.' go from a marketing campaign to an integral part of our identity."

In its third year, "Smaller. Smarter." continues to generate momentum. This year's commercials have outpaced previous versions of the campaign in response and continue to generate views on YouTube, Slabach said.

One commercial, which features video of a dog trying — and struggling — to get through a dog door, has done especially well. The spot elicited laughs and cheers throughout the big crowd in Martin Hall.

"The dog is a star," Slabach joked.

As an addition to the marketing campaign, Slabach announced a secret, one-time only advertisement set to run during the Oct. 27 Monday Night Football game featuring the Dallas Cowboys. The ad is a different take on "Smaller. Smarter." and will appeal to both students and parents.

Texas Wesleyan worked with Dallas advertising agency Firehouse to evolve the campaign. Firehouse is the agency of record for Taco Cabana, as well as the agency of many national brands like Interstate Batteries.

To cap the event, Slabach also handed out T-shirts in the style of the campaign, including a special, limited edition run of 300 neon "Smaller. Smarter." shirts.

Before handing out the shirts, Slabach thanked the students and faculty who donated their time to star in the spots.

"We purposefully cast real students and professors to show the real experience," Slabach said. "So, once again, we want to recognize and thank you for your time."