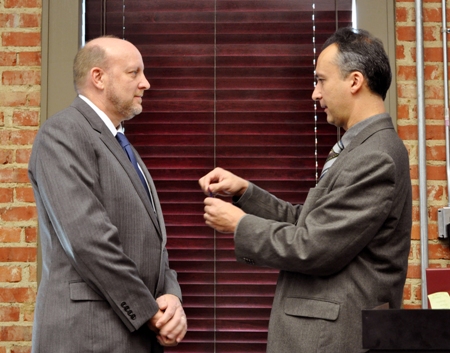 Steven Daniell, dean of the school of arts and letters, was made a Chevalier dans l’Orde des Palmes Academiques (Knight in the Order of Academic Palms) by the cultural ministry of France in a ceremony in the Baker Building at Texas Wesleyan University this morning.

“Dr. Daniell has served with high proficiency and dedication in the academic domain,” Frederic Bontems, consul general of France in Texas, said at the presentation. “He is a great teacher of French and a great promoter of French language and culture.”

The award is a high honor – The Order was initially established by Napoleon Bonaparte to recognize contributions to French language and culture, and President René Coty revived the honor in 1955. The award was pinned on to Daniell’s lapel with his wife, Lauren Daniell, and the Texas Wesleyan community of faculty and staff looking on.

Daniell thanked his family, academic mentors and Texas Wesleyan, which he said allows him to continue to research, publish and present his work across North America.

Daniell has been active in promoting French and francophone language and culture since receiving his doctorate in French from the University of Illinois at Urbana-Champaign in 1991. He served at the National French Contest administrator for Alabama for 13 years, and he also served as President of the Alabama Association of Teachers of French from 1997 to 2001. He has been a Vice President of the American Association of Teachers of French since 2009, and regularly presents papers on contemporary French-language literature.

Daniell is active and interested in all aspects of teaching French, Jayne Abrate, executive director of the American Association of Teachers of French, said in July.

“From academic research, to working with teachers at all levels – he is an exemplary professor of French. He always brings expertise and good ideas to the table,” Abrate, who nominated Daniell for the award, said.