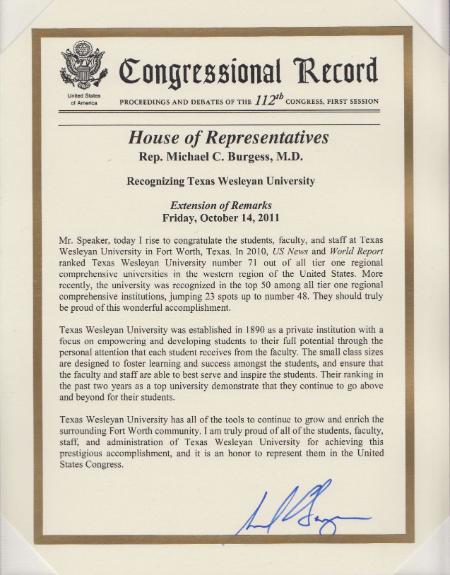 President Slabach welcomed the group to the University and introduced Fort Worth Mayor Betsy Price, as well as Congressman Michael C. Burgess, who is responsible for planning and hosting the summit.

Burgess also honored the University with a certificate of his remarks on the House floor, where he congratulated Texas Wesleyan University for being ranked in the #1 tier of regional universities by U.S. News & World Report. The remarks were entered into the Congressional Record.

The keynote speaker was Richard Fisher, president of the Federal Reserve Bank of Dallas.

The event also included presentations and speeches by Curvie Hawkins, director of planning at the Fort Worth Transportation Authority, Andre McEwing, president and CEO of Southeast Fort Worth, Inc., Michael Morris, director of transportation at North Central Texas Council of Governments and Roy Brooks, Tarrant County Commissioner and member of the Texas Wesleyan University Board of Trustees.