What do baseball and church have in common? 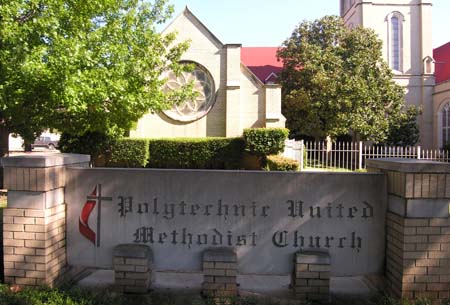 To say Texas Wesleyan University and the Polytechnic United Methodist Church (PUMC) share a long history is an understatement. Their roots in East Fort Worth go back more than 120 years. The church was founded in 1892, just two years after the college was established.

Originally located at Avenue E and Wesleyan Street, the Methodist church outgrew its home and built a new one in 1951-1952 at the corner of Rosedale and Collard.

The new edifice was designed by noted architect Wyatt C. Hedrick, whose projects included an $80 million naval base in Trinidad and the $20 million Shamrock Hotel in Houston. He worked with corporations, civic entities, universities and schools – and designed residences.

Hedrick’s firm was chosen for the PUMC design because he had developed a master plan for the college in 1949, and the church wanted its building to fit into the planned design of the campus. During the week, the church let the college use the classrooms in their three-story building.

Bobby Bragan HON '04, a former Major League Baseball player, came to the Fort Worth Cats as a player and manager in 1948. His relationship with the Cats lasted for decades; he was still signing autographs at games in recent years. Known as Fort Worth’s Mr. Baseball, Bragan donated artwork and baseball memorabilia to Texas Wesleyan. That collection, located on the first floor of PUMC, is displayed in the Betty and Bobby Bragan Fellowship Hall, which was dedicated on May 2, 2004.

In 2005, renovations were completed for the second and third floors of PUMC – the new home for the School of Arts & Letters. The dean and faculty are located on the second floor. The chaplain’s office, religion faculty and religious student groups are housed on the third floor.

The religion faculty and students will be conveniently located to the new Methodist Conference Center, which will be built on the south side of Rosedale. The center staff and faculty will work together to preparing students for seminary studies or careers in lay ministries.

This is part of a series of historical postings related to the 125th anniversary of Texas Wesleyan University, which was established in 1890.

Texas Wesleyan University
At Texas Wesleyan, we have a rich history and a Texas-sized reputation. As stewards of the University, it is our responsibility to build a future as bright as our past.
Upcoming Events
Sep
28
ProWorkflow Training Sept. 28
Sep
28
Take Control of Your Learning and Your Grades