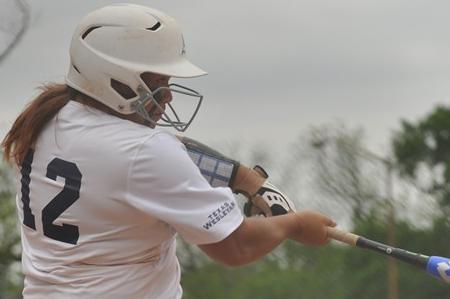 The Sooner Athletic Conference (SAC) has announced it 2016 Softball All-Conference team as voted upon by the league's eight head coaches. Seven members of the Texas Wesleyan University team were among those honored.

The Lady Rams made a remarkable run in the SAC Tournament, finishing as the conference runner-up. On Friday, Texas Wesleyan took perhaps the biggest win in program history. The Rams scored three runs in the seventh inning to beat the No. 1 team in the country, Oklahoma City University, 3-2 on their home field, eliminating the Stars and earning a spot in Saturday's Championship Game. In the title game, they gave 3rd-ranked St. Gregory's University all they could handle before falling 4-3.

The Lady Rams finished the season at 27-29 overall. At 16-12 in conference play they were the 4th seed in the SAC Tournament.

Prachyl is a sophomore outfielder from Ennis, TX. This was her second All-Conference selection (she was named to the 2nd-team as a freshman). This season she hit .383 with a home run and 27 RBI. She led the team with 40 runs scored and ranked second with 24 stolen bases. She also ranked in the top-50 nationally in hits (69), at bats (180), and stolen bases (24).

Terry is a freshman third baseman from Las Cruses, NM. This season she led the team in average (.385), doubles (14), home runs (5), and RBI (37). She also posted a team-leading 15-game hitting streak while reaching base safely in 18 consecutive games.

Batchlear is a sophomore catcher from Georgetown, TX. In her first active season with the Rams, she batted .295 with two doubles and 11 RBI. She also threw out six base runners from behind the plate while handling a pitching staff that held an ERA of 3.40.

Davis, a senior shortstop from Fort Worth, earned her second All-SAC selection (she was named 2nd-team in 2014). This season she batted .296 with a home run and 21 RBI. She posted a .922 fielding percentage at the shortstop position. She finished her three-year career at Texas Wesleyan as a .309 hitter in 129 games played.

Rossenberry is a junior right-handed pitcher from Woodstock, GA. Rosenberry went 14-13 this season with a 2.66 ERA while opponents hit .276 against her. She struck out 69 batters in 181.1 innings. She ranks 27th nationally in innings pitched. In the win over Oklahoma City, she allowed two runs, one earned, on four hits while striking out a pair in a complete-game effort.

Vasquez is a junior first baseman from Arlington, TX. In her first year with the Rams she batted .329 with two home runs and 25 RBI. She collected 53 hits and scored 24 runs while notching a slugging percentage of .416 and an on base percentage of .384.

West is a junior outfielder from Corpus Christi, TX. This season she batted .340 with three home runs and 24 RBI. She had an on base percentage of .379 and was successful on 34-of-37 stolen base attempts. She ranked 11th in the nation in stolen bases per game (.756) and 17th in total stolen bases. Heading into her senior season she is 28 stolen bases shy of the school's career record of 84 (Brandi Williams - 1997-00).