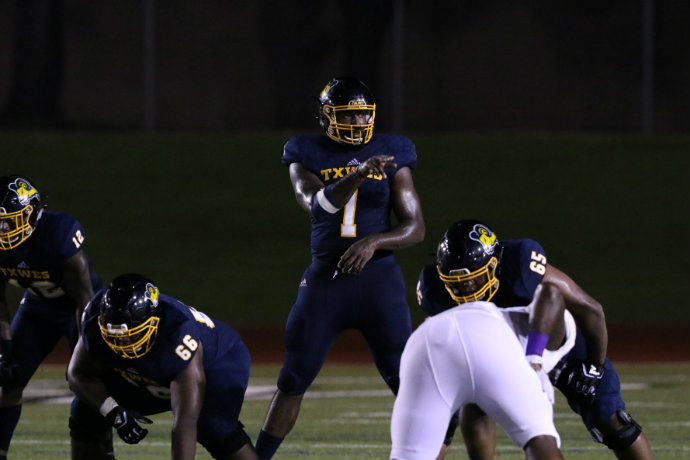 Check out the Fort Worth Star-Telegram’s coverage of Texas Wesleyan’s historic win.

FORT WORTH - Saturday night at Farrington Field, Texas Wesleyan finally put an end to their wins drought on the gridiron ... after a 45 minute lightning delay. After all, what's 45 more minutes on top of 77 years.

The Rams - led by Jermarcus Jones and a tenacious defense - got it done and then some against Texas College 36-7 on Parents Weekend, improving their record to 1-2 - and how sweet it was for all the coaches and players who have worked for this moment since the football team was re-established in 2016. The first touchdown set the tone - and quickly.

On the third play of the game, Jermarcus Jones took a hand-off 45 yards the distance sending the crowd of over 1,300 at Farrington Field to their feet. Jones, who despite being the offensive constant (12 career starts) coming into the night, had only reached the end zone once. He'd reach pay-dirt three different times in this ever-so-sweet victory, his second touchdown a 34-yard scamper with 10:22 to go in the second (to put the Rams up 20-0) and with 5:28 to go in the third (what ended up being the last score of the night). Jones finished with 135 yards on 15 carries and those three scores - the 135 yards the highest rushing total by an individual since football returned.

After a Texas College's opening drive, the Steers (0-1) punt was blocked by Dylan Pettway and scooped up by Chance Carroll 19 yards to the house. Carroll led the Rams defense with 8.5 tackles, which helped stymie the Steers in a first-half shutout.

Playmakers littered the field. Collier Ricks caught one of four completed balls in the first half on a sensational catch from 32 yards away to give Texas Wesleyan a 27-0 advantage just before halftime. The 27 points in the first half were more points than Wesleyan had scored in any of the first 12 games of the programs return - the spark, energy and confidence were ever-present.

In the third, the defense picked up a safety - a combined crushing from Byron Tate and Zalen Long extended the Rams lead to 29-7, after the Steers finally managed to turn all their yards into some points on a 21-yard Carlos Mosby run (despite trailing 27-0 at the half, the Steers had more first downs, total yards and time of possession at the break).
Chijoke Iwuagu helped Texas Wesleyan hold the Steers to just 2.2 yards per rush up front, with seven tackles, 2.5 for loss. Three of Pettway's six tackles were for loss, 18 times hitting Texas College backwards for negative yardage. Diamond Williams and Byron Tate also had forced fumbles in the game - a game that featured five fumbles, three interceptions and 24 penalties in the slush the flash storm left behind.

Donovan Isom returned from injury to complete 4-of-13 passes for 71 yards with the touchdown to Ricks and no picks, but Avery Childsgot plenty of second half work in, going 5-for-12. Jordan Griffin helped keep Jones fresh by racking up 49 yards on 11 carries. Even tight end Marquet Kennedy had 19 yards rushing on a successful fake punt that, despite their being a penalty on the play, had just enough success to get the first down anyway.

WHAT'S NEXT:
Texas Wesleyan football will head to Arizona Christian to take on the Firestorm, who managed to squeak past Lyon College Saturday 26-23. ACU is still unbeaten: 3-0. Lyon is Wesleyan's home opponent on October 13, but will host Langston first - also unbeaten - October 6.