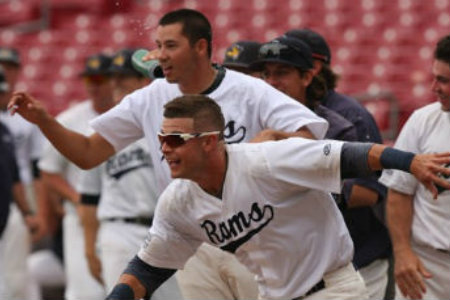 The No. 22 Texas Wesleyan University baseball team (37-15, 19-5 SAC) clinched the Sooner Athletic Conference Regular Season Championship by sweeping a doubleheader at Southwestern Assemblies of God University (14-40, 4-20 SAC) on May 3. The Rams won with scores of 7-4 and 11-1.

The NAIA released the eighth regular season edition of its Coaches' Top-25 poll on May 3. Conference runner-up University of Science & Arts (USAO) rose one spot to No. 16, while the Rams held at No. 22. Wayland Baptist, who finished fourth in the SAC standings, checked in at No. 24.

The Rams finished with a league record of 19-5 and with a school-record 30 triples. The previous record of 24 was set in 2005. 30 triples currently ranks second in the NAIA, just one behind LSU-Shreveport.

The Rams will be the top seed in the SAC Tournament. They will play in the Oklahoma City bracket and will open with 8th seeded Bacone at 11 a.m. on Friday, May 6. The SAC Tournament features two four-team double-elimination brackets split between Oklahoma City and Chickasha, Oklahoma. The bracket winners will meet at Oklahoma City's Jim Wade Stadium for the title game at 1 p.m. on Monday, May 9.

Texas Wesleyan's last baseball conference championship came in the Red River Athletic Conference in 2010. The Rams joined the SAC prior to the 2014 season.