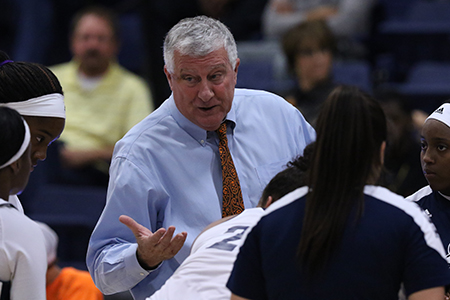 Franey compiled an overall record of 103-82 (.560) in his six seasons at Texas Wesleyan, ranking him third in program history in coaching victories. He coached 15 All-Conference selections, four NAIA Scholar-Athletes, and the program's only 3-time NAIA All-American in Katelynn Threats. His teams posted a winning record in five of his six seasons including campaigns of 25-wins (2012) and 21 wins (2013).

"My time at Texas Wesleyan has been a great experience," Franey said. "I've been fortunate enough to work with a great staff and to coach some of the best kids you will ever meet.  My love of basketball will continue, but I will surely miss the players and great young ladies that I have coached at Texas Wesleyan."

Franey's impressive coaching career included stops at the junior high, high school, junior college, NCAA Division I and II and NAIA levels. He will continue to coach his Texas Elite club team through this summer and will coach the Adidas USA Team in Italy in June.

"I am sad to see Coach Franey leave," Trachier commented. "We have been friends for a very long time and even coached together some years ago. I will have big shoes to fill, but I am very excited about working with this team and about this opportunity. We have a solid core of very good players returning next year, and our goals will be lofty."

Trachier becomes the 10th head coach in program history. He takes over a program that is set to return two All-Conference players from a team that posted a record of 18-12 this season. Trachier has served as Texas Wesleyan's Athletic Director for six seasons. He has built a tremendous record particularly in his focus on the academic success of Texas Wesleyan's student-athletes. In his first five seasons, the Rams have produced 62 NAIA Scholar-Athletes (3.5 Cumulative GPA). In the 2015-16 academic year, the department produced a school record 26 Scholar-Athletes and 10 NAIA Scholar-Teams (3.0 Cumulative GPA).

Trachier will serve as both Athletic Director and Head Women's Basketball Coach while the University will hire an associate athletic director.

Coach Franey was pleased with Trachier's assignment. "I've seen Steve coach, and he will be a great fit for this program.  The players who I reluctantly leave behind will be in good hands with him. I plan to be a big fan next year."

The 2016-17 Lady Rams posted an overall record of 18-12 and a Sooner Athletic Conference record of 10-8. The team featured only three seniors while All-Conference selections Ashley Bruner and Bailey Broadnax are set to return for their senior season.