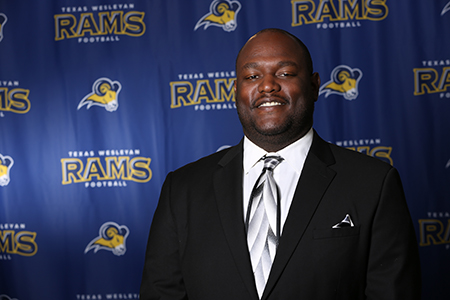 Calvin Powell has been named the offensive coordinator for Texas Wesleyan University Football.

Powell has eight years of coaching experience, including five at the collegiate level.

He will immediately join Coach Joe Prud’homme and Coach Paul Duckworth in recruiting football players to begin at Texas Wesleyan next fall. Players that are interested in joining the team should apply now.

“Offensive success starts up front and Coach Powell has the background we were looking for to help us build a championship program,” Joe Prud’homme, Texas Wesleyan’s head football coach said. “He has Texas football roots, a background in private education, and experience coaching at the Division 1 and NAIA football levels.”

Powell comes to Texas Wesleyan from Temple University in Philadelphia. At Temple, Powell was an offensive graduate assistant, helping the Owls to a 10-4 record and an appearance in the inaugural American Conference Championship game as well as the Marmot Boca Raton Bowl.

Powell is a graduate of Duncanville High School in Duncanville, Texas. He attended Southwestern College in Winfield, Kansas, where he was an offensive lineman.

“Bringing college football to a small, private university that is focused on developing the student athlete speaks to me on a personal level,” Powell said. “After high school, I would have relished the opportunity to stay and play football in the metroplex while getting the personal attention and educational focus of a small university.”

Prior to his most recent season at Temple, Powell was the running backs coach and video coordinator at State University of New York (SUNY) Maritime College. He also coached at Langston University, a fellow member of the Central States Football League, and Northeastern Oklahoma A&M University.

“Powell’s strategy of building a strong running game to complement a high-percentage pass game, and play action packages is in line with my philosophy,” Prud’homme said. “Balance is very important. It keeps defenses guessing and allows you to use all of your players to the best of their abilities.”

Powell’s first day of his new role began on April 4. Texas Wesleyan announced last month that it is reestablishing the University's football program with a red-shirt leadership class that will begin practicing during the 2016-17 season. Games are scheduled to begin in the 2017-18 season.

“To be back home in the Dallas-Fort Worth area and help build a new program with Coach Prud’homme is a once-in-a-lifetime opportunity,” Powell said.