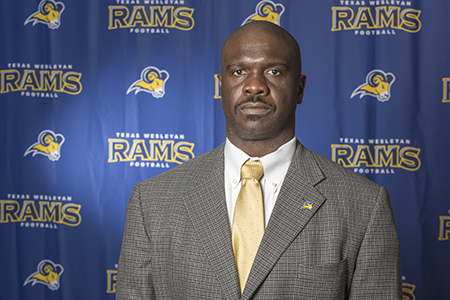 Duckworth will immediately join Prud’homme in recruiting football players to begin at Texas Wesleyan next fall. Players that are interested in joining the team should apply now.

Duckworth brings an impressive body of work both as coach and as player. He was a sixth-round NFL draft pick by the Green Bay Packers in 1994, but left the team due to injury. At the collegiate level, Duckworth played for the University of Connecticut. In 1998, UConn celebrated 100 years of football and named Duckworth to their All-Time Team.

“Coach Duckworth is a very motivated and skilled defensive coach,” Prud’homme said. “He’s very resourceful and imaginative in his schemes and has a way of getting the very best out of his players. He’s excellent at setting and maintaining high expectations and a real positive culture.

“I’ve worked with him for a long time and have been very impressed with his ability to slow down high-powered offenses when nobody else could. He’s a perfect fit for our vision for the program where the student in student-athlete comes first.”

Prior to joining Prud’homme at Nolan Catholic, Duckworth was an assistant defensive coordinator for defensive ends and running backs at Bloomfield High School in Connecticut. During his tenure, Bloomfield went 47-0 and won four consecutive state championships in 1997, ’98, ’99 and ’00.

Texas Wesleyan announced last month that it is reestablishing the University's football program with a red-shirt leadership class that will begin practicing during the 2016-17 season. Games are scheduled to begin in the 2017-18 season.

Texas Wesleyan University
At Texas Wesleyan, we have a rich history and a Texas-sized reputation. As stewards of the University, it is our responsibility to build a future as bright as our past.
Upcoming Events
Feb
29
Scholarship Auditions - Feb. 29
Feb
29
TXWES TAMFT Luncheon
Mar
2
YuJa Basics
Mar
3
Safety Awareness Training March 3
Mar
4
Flip Grid Workshop 3/4
Mar
4
Generation Z 3/4