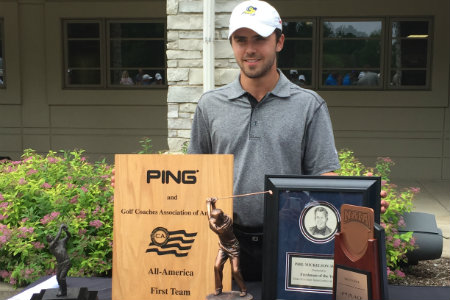 Texas Wesleyan University's David Ravetto entered the final round at the 65th Annual NAIA Men's Golf National Championship at TPC Deere Run with a share of the lead. On Friday, the freshman from Paris, France was on fire as he scorched the field with a -3 (68) to run away with the O.D. Bounds National Medalist Award. Ravetto's performance also lifted the Rams to a 4th place finish in the program's 55th tournament appearance.Ravetto Wins

Ravetto is the 10th Ram to earn medalist honors at the National Championship (an NAIA record), and the first to do so since Chris Gaines in 1998. Following the tournament, he also received the NAIA Arnold Palmer National Individual Champion Award and the NAIA Phil Mickelson Outstanding Freshman Award.

He entered the day at even par (213) tied atop the field of 156 individuals with Victoria's Lawren Rowe and Oklahoma City's Matthew Cheung.

The day started right with when he birdied his opening hole, but bogey's on three and four dropped him to +1. He quickly recovered with two more birdies on six and eight and held the outright lead at -1 as he made the turn.

The lead swelled on the back nine as Ravetto needed only four strokes to complete the par 5 10th hole. Another bird on 15 put him firmly in command at -3. Bogey's on 16 and 18 may have spelled trouble for the talented freshman, but in between he carded an Eagle on the Par-5 17th that proved to be the exclamation point on his title run.

Ravetto's 68 highlighted a round of two under par (282) that proved to be the low round of the tournament as all five Rams turned in their low mark of the tournament. The performance vaulted Texas Wesleyan from a tie for 7th all the way to a 4th place finish.

Leo Mathard shot -1 (70) and finished tied for 17th at 295. Steven Anderson turned in a round of even-par 71 and Nick Krsnak counted a round of 73. Matthew Killam also carded a round of 74 on Friday.

Texas Wesleyan University
At Texas Wesleyan, we have a rich history and a Texas-sized reputation. As stewards of the University, it is our responsibility to build a future as bright as our past.
Upcoming Events
Sep
28
ProWorkflow Training Sept. 28
Sep
28
Take Control of Your Learning and Your Grades