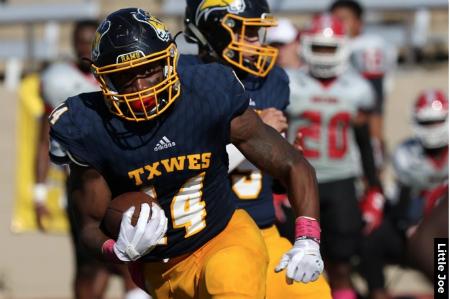 Get your calendars out Ram fans.  Texas Wesleyan's 2018 Football schedule has been released.  Can't wait until September for football?  We've got you covered.  The Rams have also announced the date and time for their Blue & Gold Spring Game on Saturday, April 21.

The spring game will be held at Farrington Field on Saturday, April 21.  Game time is set for 2:00 p.m. and admission is FREE!

The Schedule
The Rams have ten games on the docket for the 2018 season with five at home and five on the road.

The season kicks off on the road in the Rams' only non-conference tilt of the season.  They will play at NCAA Division II Texas A&M Kingsville on September 8.

The Rams then jump right into Sooner Athletic Conference play. The SAC, which added football this season, will house ten teams, and the Rams will play all nine conference opponents in the course of the season.

Texas Wesleyan's home opener is scheduled for September 15, when they host Texas College.  The team will host Langston and Oklahoma Panhandle State University on October 6 and 13.  After a pair of road games, they will return to Farrington for Homecoming against Lyon on November 3, and then close the schedule out at home against Ottawa-Arizona on November 10.

Saturday Night Lights
New to the schedule this season are night games at Farrington Field.  The home opener on September 15 as well as the Langston game on October 6 are scheduled for 7:00 p.m. kickoffs.  The remaining home games are set for 2:00 p.m. starts.

Rivalry Weekend
If you plan to travel to just one road game, make it a short trip and follow the Rams down highway 287 to Waxahachie on October 20, when Rams will have their second meeting with the rival Lions of Southwestern Assemblies of God (SAGU) at Waxahachie High School.

Titletown, TX
Can't wait for your football fix?  Be sure to check out the Fort Worth Star-Telegram's award winning web series Titletown, TX.  Jared Christopher's documentary of the Rams' inaugural season will get you fired up for the season to come.  The entire season (ten episodes) is currently available on Facebook.

Texas Wesleyan 2018 Football tickets will go on sale this summer.  Stay tuned to RamSports.net for details on season tickets when they become available.