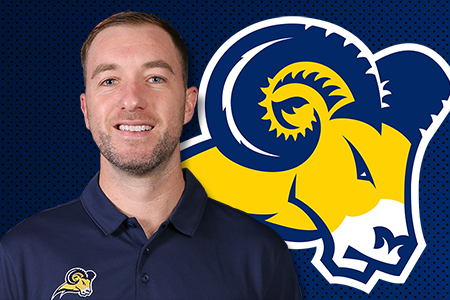 Morningstar­, an All-Big 12 selection at the University of Kansas under the direction of Head Coach Bill Self, brings a wealth of experience to the Texas Wesleyan program as the Rams set out to defend their NAIA Division I National Championship.

Morningstar will fill the hole left by Matt Garnett, who served as associate head coach and was an integral part of the Rams’ Championship run.

“Losing Matt Garnett was tough,” Shingleton said. “Myself, our team and the University all benefitted from him, and I wish him only the best in his future endeavors. Matt and his family are just great people. He is a great friend of mine and I am forever in debt to him and all that he has given to this program.”

Shingleton went on to praise Morningstar.

“I’ve known Brady for a few years, and when this position opened up, it was a no-brainer for me to see if he was interested. Brady has been groomed from a tremendous basketball background, and I’m excited to have him put his fingerprint on our program on and off the court. Texas Wesleyan is a special place. Brady understands that and that is what I’m most excited about.”

Morningstar graduated from the University of Kansas (KU) in 2010 after spending five seasons with the Jayhawks. He was a part of KU’s 2008 National Championship team, while also helping the Jayhawks to three NCAA Elite Eights, four NCAA Sweet 16’s five Big 12 regular-season titles, and four Big 12 Tournament championships.

He made a connection with Coach Shingleton through fellow Lawrence, KS, native and former Ram Doug Compton. “It’s an unbelievable opportunity,” Morningstar said of his move to Texas Wesleyan, “to work for such a respected coach who knows what he’s doing and is passionate about the game. Coach Shingleton is obviously running a very good program, and I can learn a lot from him as a coach.”

Texas Wesleyan will begin its title defense on Nov. 2, when they host Southwestern Adventist University at the Sid Richardson Center. Ram fans should plan to arrive early, as the 2017 team will receive their National Championship rings prior to the start of that season-opening contest.

Texas Wesleyan University
At Texas Wesleyan, we have a rich history and a Texas-sized reputation. As stewards of the University, it is our responsibility to build a future as bright as our past.
Upcoming Events
Dec
3
Transition to Teams for Virtual Class Sessions 12/03
Dec
3
CETL Coffee Break 12/03
Dec
3
TXWES Eats: Holiday Edition
Dec
4
Roundtable: Ingenuity in the Classroom 12/04
Dec
9
CETL Lunch Break 12/09
Dec
14
Transparent Assignment Design 12/14