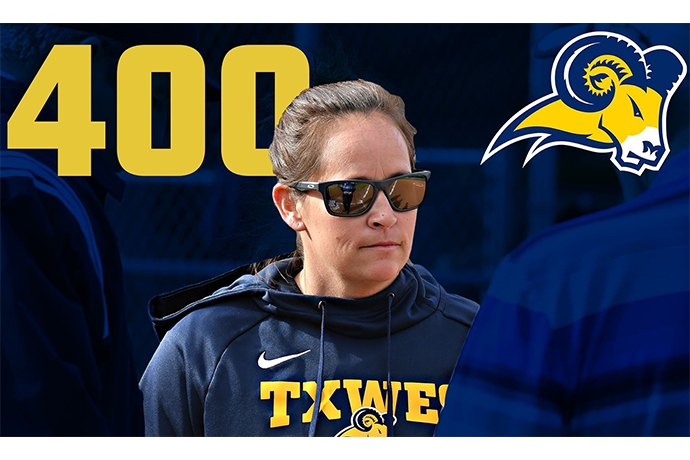 FORT WORTH, TX - Texas Wesleyan softball (3-11, 1-1 SAC) got to celebrate a milestone Tuesday afternoon most teams never get to enjoy. The players got a victory for Head Coach Shannon Gower, the 400th of her coaching career, in a 10-2 triumph over Southwestern Christian (2-4, 1-1 SAC) in a run-ruled fifth frame.

The squad showed up, shaking off a 9-2 loss in the first game of the doubleheader with a four-run second and a five-run fifth in Game 2. Jenna Rhoades went 4-for-4 with 4 RBI on three different hits, a career-high for the third-year Ram.

Per the most recent NAIA records for winningest coaches, prior to the start of the 2018 season, only 25 active head coaches around the country have eclipsed the 400-career-win mark. Of that company, she ranks 19th in wins per season amongst the very best coaches, averaging 26.4 victories a season.

"Honestly, it's cool to hit that accomplishment, but ultimately it's not about me," Gower said. "My assistant coach (Felix Esparza) is right there with me. I feel I need to (mention) every single player and coach's name - that's what it's really about. I love the game, I'm grateful for the game and what the university has done for me. They hired me young, took a chance on me. If I can impact just one kid per year, that means more to me than a stat and that's all that it is - a stat."

Gower is the longest-tenured coach in Texas Wesleyan Softball history, now in her 16th season since she ascended from player to assistant coach to head coach in just three seasons. During her tenure, she has coached 54 All-Conference players, five Conference Players of the Year, 10 NAIA Scholar-Athletes, and three All-Americans. She has recorded two conference championships (2010 and 2012) and made one appearance at the NAIA National Championship Opening Round (2012). In addition, her 2006 team cracked a then NAIA record 66 home runs, with an emphasis - always - on the word team.

During non-conference, the Lady Rams have spent the majority of a pair of weekend tournaments trying to put the pieces together for conference season, which the squad emphatically did. In ten losses, the team lost seven by just three runs or less. Pitcher Madison Ortiz got the start and she was able to reduce homerun hitters from Game 1 (Keirsten McCraw and Faith Maberry) to 0-for-4 and a strikeout.

Rebecca Finley also had herself a day. Just a pinch-runner in Game 1, Finley ignited the offense with a 3-for-3, 5 RBI performance including a 3 RBI double to right field that scored Chyann Jarrett (who stayed busy and errorless with Ashton Davis fielding ground balls from second to first base much of the second matchup) Saeya Esparza and Caille Hendrick.

Game 1's loss was the first to the Eagles since 2015 but Game 2's 10 runs was the eighth time in the last 12 meetings Southwestern Christian was haunted by double-digit runs on the scoreboard.

Texas Wesleyan will host No. 3 Oklahoma City at Sycamore Park Tuesday, March 3 starting at 2 p.m. The Stars are off to a rough start, dropping two to No. 2 Science and Arts-Oklahoma, followed by a loss to 2-4 Central Methodist. OCU barely took out Oklahoma Panhandle State earlier in the week in an extra eighth inning.