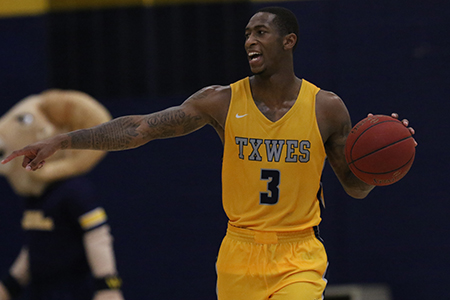 Texas Wesleyan University's Branden Jenkins has made the cut from 100 players to 50 players on the Bevo Francis Award Watch List. The award is given annually by Small College Basketball to the top men's basketball player across affiliations of NAIA Divisions I and II, NCAA Divisions II and III, USCAA and NCCAA.

In addition, Jenkins has been nominated to compete in the NAIA Shoot & Slam dunk contest which will take place during the 2018 NAIA National Championship tournament in Kansas City.

Jenkins is having a tremendous season for the Rams. He is the Sooner Athletic Conference's leading scorer and currently ranks sixth in the NAIA at 21.6 points per game. He is shooting 48.2% from the field, 40% from three-point range and 80% at the free throw line while averaging 5.3 rebounds, 2.9 assists and 1.3 steals per game. During a win over then 14th ranked Oklahoma City, he was just one-point shy of the school's single-game scoring record with 44 points.

The Bevo Francis Award is named for one of the most prolific scorers in college basketball history during his career at Rio Grande College (1951-55). He topped 100 points in a game on two occasions and averaged an NCAA record 48.3 points per game during the 1952-53 season.

The award will be selected by a committee of University presidents and coaches. The watch list will be narrowed to 25 players on March 15. The winner will be announced on April 2, and for the first time will be presented on May 19 at the newly created National Awards Show in conjunction with the SCB Alumni Association's Celebration of the Game event in Kansas City, MO.