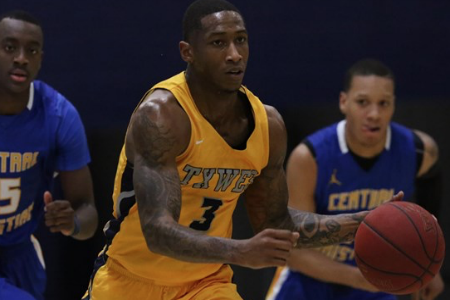 The 20th ranked Texas Wesleyan University Men's Basketball team (21-9, 14-6a SAC) rallied for a 78-75 win over Central Christian College (15-14, 7-13 SAC) in the Sid Richardson Center on Friday, Feb. 23.  The victory combined with an Oklahoma City loss at SAGU guarantees the Rams at least a share of a third consecutive Sooner Athletic Conference Regular Season Championship.

The Rams have won three consecutive SAC Regular Season championships.  All-time they are now 53-40 in SAC play, while they are 41-14 in the last three seasons.

The Rams celebrated their seven seniors, who were playing their final regular season home game, prior to the contest, but Central Christian jumped out to an early lead in the game.

The Tigers ran out to an 26-11 lead and forced the Rams to play catch-up.  With six-and-a-half minutes to play in the first half, the Rams finally found their stride.  Five straight points from Ryan Harris sparked a 13-2 run that brought the margin down to four points at 30-26.  Later, back-to-back threes from Harris and Rob Thomas followed by a pair of free throws from Branden Jenkins gave the Rams their first lead of the game at 34-33 with two minutes to play.

Central Christian shot 52% in the second half to keep the game tight throughout, but the Rams forced nine second half turnovers to counter the hot-shooting Tigers.

The game saw nine lead changes, but Texas Wesleyan held the lead for just 3:20.  Central Christian led for 32:14 and the game was tied for 4:26.

Curtiss Anderson gave the Rams the lead for good with an offensive rebound and fall-away jumper that pushed the score to 76-75 with 1:43 to play.

The Tigers had the ball with 36 seconds remaining, but Ryan Harris forced a tie-up and the possession arrow favored the Rams with 24 tics remaining.  CCC sent Juwan Jones to the free throw line with 12 seconds to play.  Jones knocked down two clutch free throws, and the Tigers inexplicably tried for a two, missing a layup with five seconds to play.

Branden Jenkins led all scorers with 25 points to go with nine rebounds.  Curtiss Anderson finished with 15 points, while Juwan Jones and Ryan Harris each contributed 12.