Men's golf garners SAC Awards, including Player of the Year 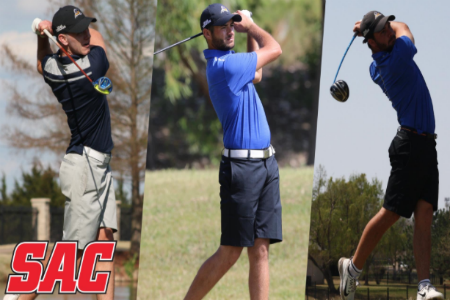 Rowan Lester and Leo Mathard were named All-Conference, an honor reserved for the top-five players in the conference as voted upon by the league's head coaches. Lester was named SAC Player of the Year, while Victor Miron was named SAC Freshman of the Year.

Rowan Lester has backed up a phenomenal freshman season in which he became the 11th Ram to win the NAIA Individual National Championship, with an even stronger sophomore campaign. The sophomore out of Dublin, Ireland, leads the SAC with a scoring average of 70.65. If the season ended today, that would break Texas Wesleyan's school record of 71.70 set in 2015-16 by >David Ravetto and give Lester two of the top-five seasons in school history. Lester has notched three wins this season: the Kohler Collegiate at Whistling Straits, the Southern Plains Intercollegiate at Gallardia and the DBU Patriot Classic at Hackberry Creek. His 54-hole score of 202 (68-69-65) at Primm Valley was good for a fourth-place finish and the third-best 54-hole score in school history.

Mathard, a junior out of Vieux-Boucau, France, has notched a scoring average of 72.15 this season. If the season ended today, that would be good for fourth on Texas Wesleyan's all-time list. He started the season with back-to-back wins at the Texas Intercollegiate at Hawks Creek and the Coastal Collegiate at Salishan. He closed out his victory at Salishan with a school-record 63 (six Rams had previously carded a round of 64). That score also got him to 202 for the tournament, a 54-hole score that ranks third in school history.

Miron has been an instant difference maker for the Rams. He competed in all nine tournaments as a freshman and notched a scoring average of 73.12. He led the Rams to one of their six victories by finishing as the runner-up at -11 at The Wigwam. He has posted four top-10 finishes including an 8th place finish at the SAC Championships.>

The Rams have had one of the best seasons in the illustrious history of the program. They have been ranked 1st or 2nd in the NAIA all season after opening the season with five consecutive wins. On the year, they have notched six victories and five individual wins in nine tournaments. They will make the program's 57th appearance at the 67th NAIA National Championship which will be held at TPC Deere Run in Silvis, IL, May 15-18.