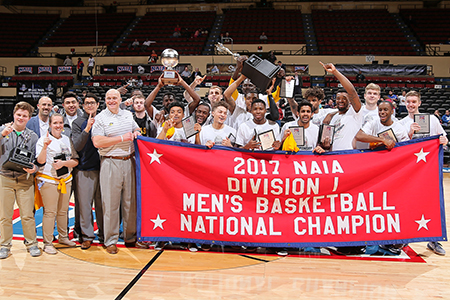 The ring ceremony will begin at 7 p.m. in the Sid Richardson Center, and Texas Wesleyan’s title defense will begin at 7:30 p.m. when they take on Southwestern Adventist University in their season opener.

Last season, the Rams produced a second consecutive Sooner Athletic Conference championship before ripping off five consecutive wins in the NAIA National Tournament to secure the program’s second National Championship. The title run included a thrilling 83-82 overtime victory in the Fab Four over second-ranked William Penn University and an 86-76 romp over Life University in the title game.

Admission for Texas Wesleyan basketball games is just $5. Texas Wesleyan students, faculty and staff (with ID) as well as children 12 and under are free. All seats are general admission and may be purchased in cash only at each game.

Games can also be viewed at ramsports.net/LIVE at a cost of $7.95 per game or $29.95 for a season pass. Mark Warde and Cam Irvine will call the action from the Sid Richardson Center.