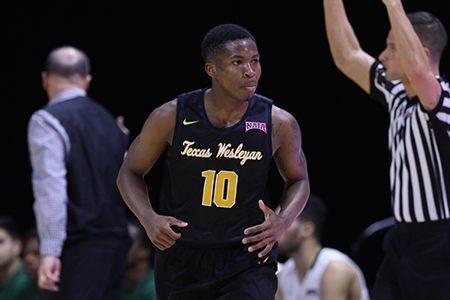 The National Association of Intercollegiate Athletics (NAIA) has announced the 32 qualifiers and the single elimination bracket for its 81st Annual Division I Men's Basketball Tournament. No. 15 Texas Wesleyan will begin its title defense on Thursday, March 15, when they take on No. 23 Graceland University. The game is scheduled for a 5:45 p.m. tip-off in Kansas City's Municipal auditorium.

Texas Wesleyan vs. Graceland is a 4 vs. 5 seed contest in the tournament's Duer Bracket. The contest features two programs with very difference tournament histories.
The Rams (22-10) are making their 16th tournament appearance all time and are seeking to become the tournament's first back-to-back champion since Oklahoma City accomplished the feat in 2007 and 2008. Texas Wesleyan's rich tournament history dates back to the 4th Annual NAIB tournament in 1940. All-time, the Rams are 18-13 in tournament play, while they are 12-6 in their last eight appearances beginning with their first title run in 2006.
Conversely Graceland (24-10) is one of two teams making its first ever tournament appearance. The Yellowjackets earned an automatic bid to the tournament as the Heart of America Athletic Conference Tournament Champion. The Jackets were the third seed in the Heart Conference Tournament, but have won each of their last six contests.

The tournament's four No. 1 seeds went to No. 1 The Master's, No. 2 Pikeville, No. 3 LSU-Shreveport and No. 4 William Penn. The Master's, which boasts the nation's best record at 29-2, is the tournament's overall No. 1 seed for the first time in school history.  Twenty-three of the 32 teams are making repeat appearances including all five of Texas Wesleyan's opponents from last year.
Seven of the qualifiers have won at least one previous national title led by Oklahoma City's six. Only OCU (6), Life (3), Texas Wesleyan (2) and Georgetown (2) have multiple rings.  Georgetown is making its 37th tournament appearance which is an NAIA record.
Graceland and Central Baptist are making their first tournament appearance.

The Sooner Athletic Conference has five teams in the field of 32, which is second only to the Mid-South Conference's six teams. Oklahoma City is the 2 seed in the Naismith Bracket, USAO is the 8 seed in the Cramer Bracket, and Wayland Baptist is the 8 seed in the Liston Bracket.
SAGU is the 6 seed in the Duer Bracket along with 4th seeded Texas Wesleyan, setting up a potential fourth meeting of the season between the two rivals should both advance to the quarterfinals.

Tournament tickets can be purchased here.  For fans unable to make the trip to Kansas City, the NAIA Network will carry the first 30 games of the tournament.  Fans can stream games at a cost of $9.95 per game (or $34.95 for a tournament pass). The championship game will be carried live on ESPN3.
Free live stats of all games will be available via dakstats and can be found here.
Upcoming Events
Dec
7
Paint Your Stress Away (Holiday Edition)
Dec
14
Faculty and Staff Holiday Luncheon
Dec
15
Grad Toast Happy Hour at Rodgers Roundhouse
Dec
15
2022 Fall Grad Toast
Dec
16
Fall 2022 Undergraduate Robing Ceremony
Dec
16
Fall 2022 Gradaute Hooding Ceremony