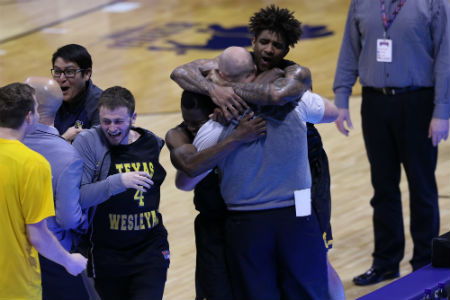 The Rams will meet Life University (26-10) in the NAIA Division I Championship Game at 7 p.m. on Tuesday. The game will be carried live on ESPN3.

Texas Wesleyan trailed by three (82-79) with 20 seconds to play in the overtime period. The Rams came out of a timeout and went for a quick two from Ryan Harris, and then quickly fouled the Statesmen. Lionel Ellison missed the front end of a one-and-one bonus, and Najeal Young came down with the biggest rebound of the game. Head Coach Brennen Shingleton elected not to call his final timeout, and the move paid off.  Dion Rogers found space for a baseline jumper that found its mark for the win.

Of the slow start, Head Coach Brennen Shingleton said, "We've been getting in our own heads all year, and we were uncomfortable to start, so we had to figure out how to play our game. We were really stagnant at first, and it took us a while to figure out where we could get shots. Once we did that, we got to play at our pace."

Shingleton went on to talk about the thrilling finish, "At the end of the day players make plays," he said. "It had nothing to do with coaching at that point, and the guys gutted it out. Again, they just don't want to go home. We love Fort Worth and Texas Wesleyan, but we want to be here for another 48 hours."

After a forgettable first half in which the Rams shot an anemic 26 percent from the floor, the team came to life and eventually overcame the high-powered Statesmen.

Najeal Young and Ryan Harris combined for 31 points after the half. The Statesmen were in complete control at 51-35, four minutes into the second half when the Rams began to chip away at the deficit. A three-point play from Young started an innocent run that got the margin down to 51-40.

For the complete story, visit ramsports.net.