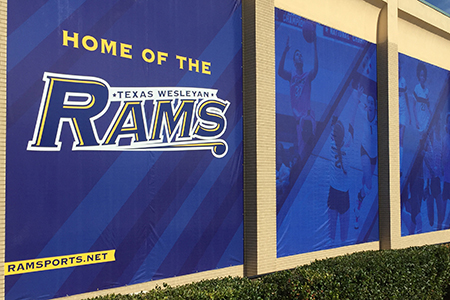 The Sooner Athletic Conference (SAC) announced today that 739 student athletes have been named to the 2016-17 Commissioner's Honor Roll presented by Cypress Risk Management. For the second consecutive year, Texas Wesleyan University led the conference, this time with 104 student athletes making the grade.

In order to be nominated for the SAC Commissioner's Honor Roll, a student-athlete must have been a member of an SAC sponsored sports team and maintain a GPA of 3.0 or higher throughout the academic year. All 10 member institutions and each of the league's 14 sponsored sports were represented on the 2016-17 Honor Roll.

This is the third year in which the honor has been awarded and the second consecutive year in which the Rams paced the conference. Oklahoma City was second with 94, while Wayland Baptist (88), John Brown (77), and Mid-America Christian (75) rounded out the top-five.

Head Coach Mike Jeffcoat's Baseball squad led the way for the Rams with 20 student-athletes on the list. Softball (14), Women's Soccer (13), Volleyball (11) and Men's Soccer (11) all reached double-figures as well.

The SAC consists of 10 colleges and universities in Texas, Oklahoma, and Arkansas. The Commissioner's Honor Roll along with the SAC Academic All-Conference teams are presented by Cypress Risk Management, an insurance agency, based in Omaha, NE, that specializes in providing solutions for collegiate student health and athletic accident insurance. The organization currently insures over 500,000 students nationwide and is already engaged with several other NAIA conferences in similar partnerships.