Rams ready for table tennis nationals in Round Rock 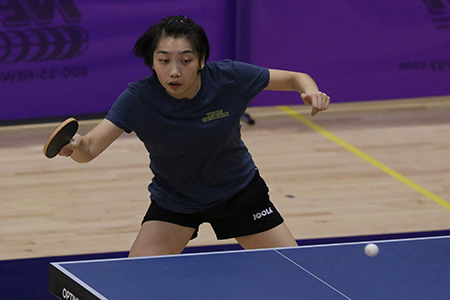 The 2018  iSET College Table Tennis National Championships begin next week in Round Rock, TX, and the Texas Wesleyan Rams will be trying to ensure that the bulk of the hardware makes a short trip home to Fort Worth.

The National Championships will be played at the Round Rock Sports Center April 20-22.  Over 250 of the nation’s best collegiate players representing more than 40 colleges and universities will compete for titles in men and women’s doubles, men and women’s singles, women’s team, and coed team events.

The Rams are setting out to claim their 14th National Championship in the Coed Team event.  Overall, Texas Wesleyan owns 65 national titles in table tennis including 13 of the last 14 Coed Team championships and seven titles in the Women’s Team event.

This year, the national championship schedule has been changed up.  The event will open on Friday with team group play as well as opening rounds in men and women’s doubles as well as women’s singles.  Traditionally the event has closed with team titles on Sunday; however, this season, the team titles will be decided on Saturday, and the event will close on Sunday with doubles and singles finals.

Ram fans can follow live action on the official championship website, and find complete results from each day’s action.

General admission tickets will be available at the door.  Single day passes are $10 and an event pass is $20.