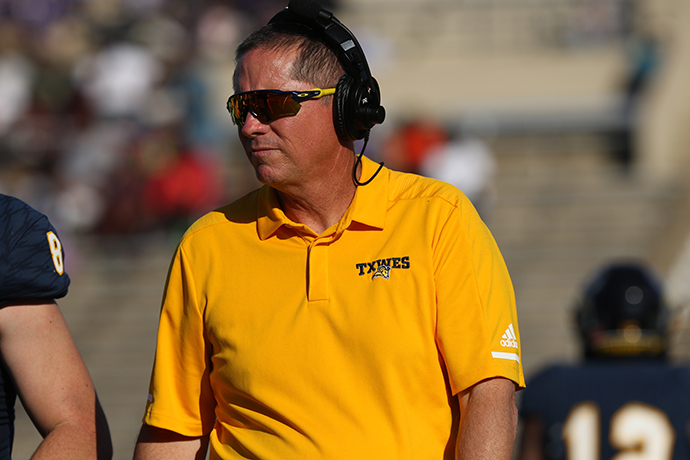 TXWES had touchdowns running the ball, passing the ball, on an interception and a fumble recovery, earned a safety and kicked a field goal. The Rams even blocked a punt and returned it for a score and despite all those points, only one player crossed the goal line twice: Senior Defensive Lineman Ryan Leichus.

Leichus, from Sacramento, California, was in the right place at the right time with 10:30 left in the first quarter when Marquavius Hollins blocked the first punt of the day, launching the ball high in the air. Leichus, in stride, caught it on the way down and walked in the end zone, putting Texas Wesleyan up 14-0. Leichus had seven tackles and a fumble recovery coming into the game, but his glorious day wasn't finished.

With the Rams up 37-14, Cody Pettit got after Texas College quarterback Decorie King and knocked the ball out, recovered by Leichus, who rumbled all the way for a touchdown. The play put the Rams up 30, despite Texas College accounting for more offensive yards than the Rams in one of the more bizarre and entertaining first halves a game can have.

The Steers had over 200 yards of offense in the first half, but had 13 penalties totaling over 130 yards in infractions. All the penalties coupled with the blocked punt, the fumble, three interceptions (two by Elijah Hall, one by Devin Griffin who jumped a crossing route sitting in a zone for 43 yards, scoring to put the Rams up 37-14 with 10:57 to go in the second quarter) and a safety forced by Pettit (put TXWES up 23-14 with 31 seconds left in the first frame) and any positives offensively for the Steers were easily forgotten. Rams quarterback Avery Childs' offensive production won't be forgotten by anyone in the stands Saturday.

Childs completed 17 of his 32 passes for 269 yards and became the first quarterback since the return of football to throw for four touchdowns in a game. He connected with four different receivers for scores: Brandon Rolfe (4 receptions, 93 yards), Collier Ricks (3 receptions, 46 yards), Trey Jackson (1 reception, 36 yards) and Cole Maxwell (3 receptions, 36 yards). Rolfe's came first, just 2:49 into the game, beating his defender cold in one-on-one coverage down the Rams sideline for a 42-yard score, put on the money by Childs.

It would have been easy for Texas Wesleyan to come out of the locker room in the third quarter cruising, up 37, but the Rams marched 72 yards on eight plays, capped by Jermarcus Jones' nine-yard touchdown run, the longest drive of both plays and yards in the game for TXWES, which earned the program's record high in points with still 11:34 to play in the third quarter.

"It felt great," Childs said. "Everybody did their job today. O-line held up really well, it was a good team win. We've struggled the past couple of weeks, with leads going into halftime and kind of came out flat. We just came out here and finished today."

The defensive line bullied yet another opponent, racking up six more sacks, including three from Pettit. After the results from all of Saturday's NAIA contests, the Rams are No. 1 in the nation with 29 sacks heading into next week's matchup at Langston. The Lions, ranked No. 15 in the country, nearly got blanked by No. 17 Ottawa-Arizona 27-7 in the NAIA Game of the Week. Griffin led TXWES in tackles with eight, with the team's leading tackler - Mark Seidler - not far behind with seven total.

Texas Wesleyan equals their win total from last season with three games to go, the final two at Farrington Field where the Rams have won three of its last four games.