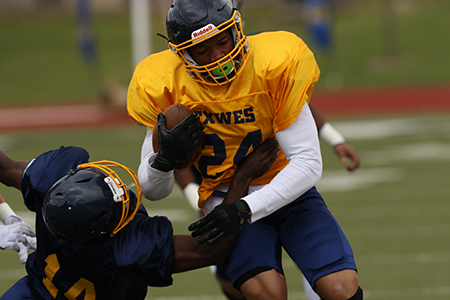 Ram fans whetted their appetite for college football Saturday afternoon as Texas Wesleyan returned to Farrington Field after a 75+ year hiatus. Head Coach Joe Prud'homme guided the team through the Blue & Gold Spring scrimmage before an estimated crowd of 2,500.

The weather cooperated with a fall-like afternoon at historic Farrington Field located in the heart of Fort Worth's cultural district. Farrington Field will be home to the Rams for the entire 2017 season. The stadium, constructed in 1939, was also home to Texas Wesleyan's last football team in 1941.

At halftime, the Rams recognized 28 signees who will join the team in the fall. Fans were also treated to appearances by Texas Wesleyan's National Champion Men's Basketball and Table Tennis teams.

Texas Wesleyan will play its first official game at McPherson College (McPherson, KS) on September 2. The team's home opener is scheduled for 2 p.m. on September 9, when they host Millsaps College (MS) at Farrington Field. Season tickets are on sale now at www.ramsports.net/tickets. Just $45 buys a season ticket to all five home games this season.