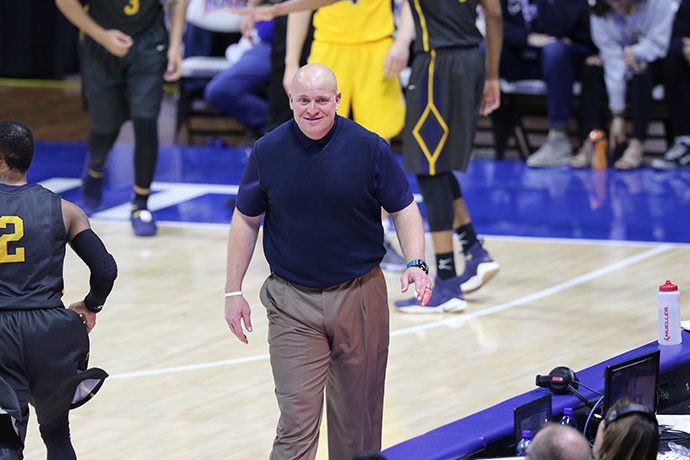 KANSAS CITY, Mo. – The Texas Wesleyan University men's basketball team will enter the 2018-19 season as the 11th ranked team in the nation, according to the preseason addition of the NAIA Top 25. The poll was voted upon by a panel of head coaches representing each of the conferences and NAIA.

The recent poll has brought even more prestige and excitement to the inaugural kick-off event coined the Texas Wesleyan Champions Classic on November 1-2 at the Sid Richardson Center in Fort Worth.

The Rams will now officially be hosting No. 1 The Master's University (Calif.), No. 2 LSU Alexandria and No. 7 LSU Shreveport.

"I'm not sure this has ever been done before," commented head coach Brennan Shingleton on hosting the event. "Even though this is a preseason poll, these four teams are consistently competing for championship at the conference and national levels."

The season opening event will feature two match-ups each night between the quartet of NAIA powerhouses.

Each coach weighed in on the excitement surrounding the event.

No. 11 Texas Wesleyan
"This is a big time event for NAIA Basketball," said Shingleton. "I'm tremendously honored to be hosting three of the best teams in the nation…this is a testament to the coaches and programs to put their team up against such a high level of competition to start the year. I'm excited to showcase our University and team on this stage, and it's something we plan on organizing every year. Our team will get a real taste of national competition right out of the gate. That's what we play for here at Texas Wesleyan and ultimately what we will face if we want to reach our goals."

The Rams, like LSUA and LSUS, took a loss to 2018 national champion Graceland (Iowa) in the opening round of the tournament. TXWES has made the tournament the last three seasons, including a championship win in 2017.

No. 1 The Master's
"We are excited to bring our program out to Texas for this classic," noted head coach Kelvin Starr. "We have a chance to compete against 2 top 10 teams right out of the gate. Awesome experience for our guys."

After being handed a shocking first-round defeat at the hands of Peru State (Neb.) last season, the Mustangs return as the top team with four first-place votes.

No. 2 LSU-Alexandria
"We are thankful that Texas Wesleyan included us in their early-season classic," commented head coach Larry Cordaro. "We believe playing these powerhouse programs will prepare us for our conference play and hopefully down the stretch if we are fortunate to make it to the national tournament again. It'll be an early test to see where this team is. It will tell us a lot right out of the gate. I've got to tip my hat to coach Shingleton for pulling this off. We look forward to the competition and the hospitality will both be first class."

LSU Alexandria jumped up 12 spots from last year's final poll for a share of second in this poll. Last season, the Generals lost by just three points to Graceland in the national championship game, 83-80.

No. 7 LSU-Shreveport
"We are excited about the opportunity to play in the Texas Wesleyan Champions Classic that will showcase four programs who have all experienced success at the national level," said head coach Kyle Blankenship. "This will not only be a great early season test for all of us, but it should also be exciting for the fans as they will be able to watch some high-level NAIA basketball."

The LSU-Shreveport Pilots advanced to the 2018 NAIA Fab Four in Kansas City, losing 87-80 to eventual champion Graceland.
--
Looking at the rest of the Top 25, 3 other SAC teams are represented. Oklahoma City comes in at five, SAGU enters the season 18th, while Wayland Baptist sits 20th. Defending champion Graceland is receiving votes.

The Top 25 is determined by a points system based on how each voter ranks the best teams. A team receives 30 points for each first-place vote, 29 for second-place and so on through the list.