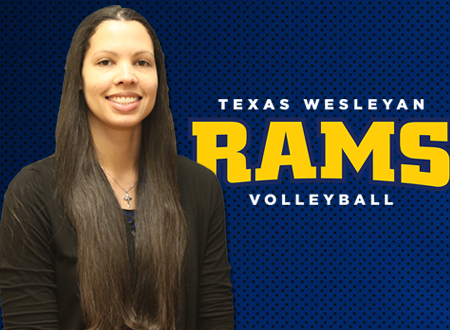 Ransom comes to Texas Wesleyan from Burleson Centennial High School where she directed Spartans Volleyball program. In two seasons at CHS, she helped the Spartans to back-to-back appearances in the Bi-District Finals. In 2017 the Spartans won a District Championship and Ransom was named District Coach of the Year.

“I am so incredibly excited to be a part of the Ram volleyball program,” said Ransom. The team had a great season last year and I want to continue building on that success. I want to thank Ricky Dotson for the opportunity to be a part of Texas Wesleyan University family. This is truly a dream opportunity for me and I am so grateful. I am excited and ready to get all of our athletes together to set goals and begin working hard for another great season.”

Ransom brings college coaching experience from Tarleton State University and Texas A&M-Commerce where she served as an assistant coach. At A&M-Commerce, she served as a graduate assistant and travel coordinator while completing a Master of Science Degree in Health and Human Performance.

Ransom earned an undergraduate degree in Business from Midwestern State University where she played Outside Hitter for the volleyball program. She led the Mustangs to a 25-9 record her senior season. That season, she led the team hitting .262 while posting 2.75 kills per set. Ransom was also named Lone Star Conference Offensive Player of the Week twice. Her junior season the team boasted its best season in school history at 27-6, including a 12-match win streak. The program capped the historic run with its first postseason berth, punching a ticket to the 2007 NCAA DII National Volleyball Championship.

The Lady Rams are coming off a highly successful season that finished with a record of 27-7 and an appearance in the NAIA National Tournament. The team defeated Campbellsville University in the National Tournament Opening Round to advance to the final site for the first time since 2005.