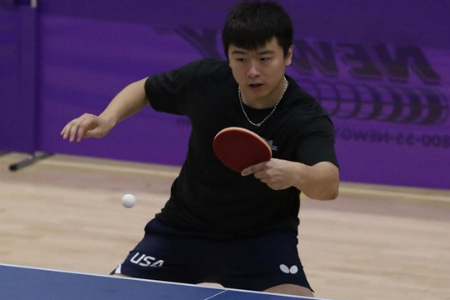 The Texas Wesleyan University Table Tennis team punched its ticket to the NCTTA National Championships with a victory at the South Region Tournament in the Sid Richardson Center this weekend.

National Championship bids were on the line all weekend, as the top three coed teams earned spots along with the top women's team. In addition, the top eight men's singles and top four women's singles players earned automatic qualifications.

The Rams ripped off 4-0 wins over TCU, UT-Austin and UT-Dallas in pool play then won 4-0 over Georgia Tech and the University of Florida in route to a showdown with rival Mississippi College. In the finals, Texas Wesleyan won with a 3-1 score.

The Lady Rams had similar success with 4-0 wins over TCU, UT-Austin and UT-Dallas in a round robin competition.

In women's singles, Zha defeated Ana Aleksandric 3-0 in the finals, while Edina Haracic and Viyaleta Manastyrskaya were also semifinalists.