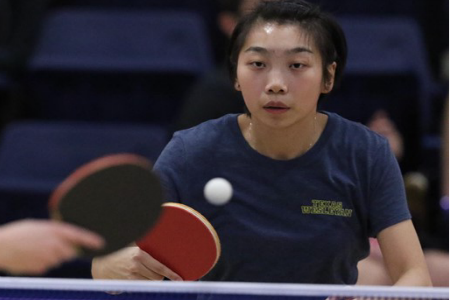 On Sunday, Yue Wu became the 8th Lady Ram to win the women's singles national championship, and the first since Sara Hazinski in 2011, after topping top-seeded Lily Zhang of Cal in six sets. Cal and Texas Wesleyan each put a pair of athletes into the semifinal round. Zhang defeated Texas Wesleyan's Wenting Zha while Wu got by Cal's Angela Guan.

In Men's Singles, upsets were the order of the day as only one of the top-4 seeds reached the semifinals. Seventh-seeded Jishan Liang advanced to the final after knocking out the top-seed, Kaden Xu of Pillar College, in the quarterfinals. However, Liang was upset by eighth-seeded Kai Zhang of Binghamton who erased a 0-2 deficit in the championship match.

The Women's Doubles final was an all-Wesleyan affair in which Yue Wu and Wenting Zha defeated teammates Ana Aleksandric and Edina Haracic 3-0. The Lady Rams had three of the final four teams as Chen Wang and Tina Huynh reached the semis as well.

In Men's Doubles, 2017 Champion Zhe Feng and 2016 Champion Bruno Ventura Dos Anjos teamed up to take Texas Wesleyan's 11th title in the event. Feng and Ventura Dos Anjos dropped the first set to NYU's Adar Alguetti and Yijun Feng, but came back to win 3-1, avenging a loss in the deciding doubles competition of the Coed Team competition.

Team titles were decided on Saturday at the Round Rock Sports Center. The Lady Rams took their 8th National Championship by defeating Cal in the final. In the Coed Team event 5th seeded NYU, the Cinderella story of the tournament, topped the Rams 3-2 in the final.

Texas Wesleyan University
At Texas Wesleyan, we have a rich history and a Texas-sized reputation. As stewards of the University, it is our responsibility to build a future as bright as our past.
Upcoming Events
Oct
7
Ram Club Luncheon
Oct
8
TXWES football vs. Southwestern Assemblies of God University
Oct
11
Gratitude Workshop
Oct
11
Hybrid Town Hall
Oct
13
Wesleyan Singers Perform with Arlington Heights High School