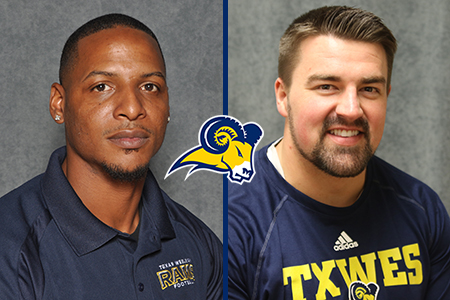 "I'm really excited with the addition of Quincy and Kyle to our coaching staff," Head Coach Joe Prud'homme, said. "They both share our vision of what we are building and where we plan to take the program."

Butler was a 1st-team All-Mountain West Conference cornerback at TCU who went on to play for the Dallas Cowboys, St. Louis Rams, and the New Orleans Saints. At TCU, he was twice named Conference Defensive Player of the Week and holds the school record for longest interception return for a touchdown at 99 yards. In addition, he was an All-American in Indoor Track & Field (4x100m relay) and set a Mountain West Conference record in the indoor 4x400m relay and a Conference USA record in the outdoor 4x400m.

Cox spent four seasons at TCU, serving the last two as a Graduate Assistant Coach with the offense. In his new role, he'll serve as the wide receivers coach and passing game coordinator. During his tenure with the Horned Frogs, TCU's offense broke over 30 school records, won a Big 12 Championship (2014), the Chick-Fil-A Peach Bowl (2014), the Valero Alamo Bowl (2015) and ranked in the top-five for both scoring offense and total offense each year.

Texas Wesleyan is making its return to the football field after a 75-year hiatus. Ram fans will be able to get an early look at the team at the Spring Blue and Gold game on April 22.  The season kicks off at McPherson College (KS) on Sept. 2. The home opener is scheduled for Sept. 9, when the Rams welcome Millsaps College (MS) to Fort Worth.