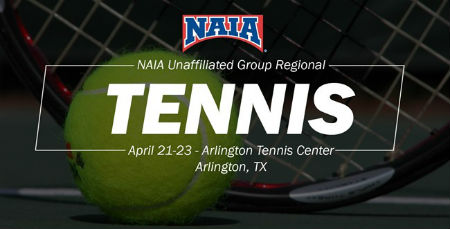 The Texas Wesleyan University women's tennis team is set to host the NAIA Unaffiliated Group Regional April 21-23 at the Arlington Tennis Center. The 2nd-seeded Lady Rams will open against 7th-seeded LSU-Shreveport at 4 p.m. on Thursday, April 21.

The Lady Rams are seeded second amongst seven women's teams. No. 21 LSU-Alexandria is the top seed.

Texas Wesleyan holds an overall record of 9-3 this season, including a perfect 7-0 against the tournament field. The Rams took their only meeting with LSUS 9-0 back on March 5.

Both the men and women's tournaments will feature quarterfinal action on Thursday afternoon beginning at 1 p.m.

Friday's semifinals are scheduled to begin at 9 a.m.

Saturday will feature the men's championship match at 9 a.m. and the women's title match at 2 p.m. The complete bracket can be viewed here.

The winner of each tournament will receive an automatic bid to the NAIA National Championship in Mobile, Alabama, May 17-21.

5. Univ. of the Southwest

2. Univ. of the Southwest