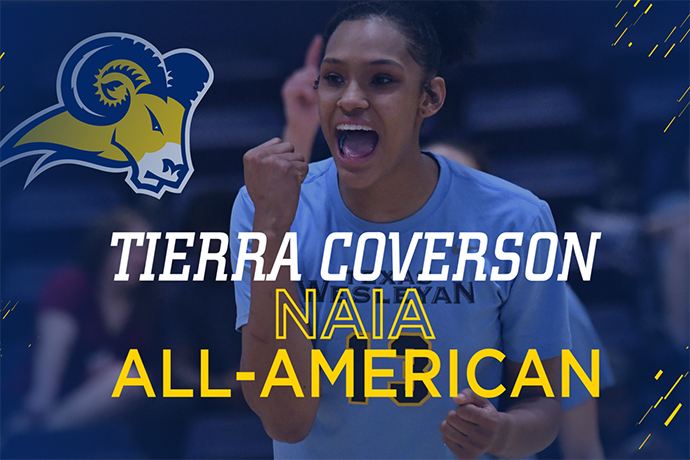 KANSAS CITY, Mo. - Texas Wesleyan's Tierra Coverson has been named to the NAIA All-America Honorable Mention list, one of only 105 NAIA players on 225 NAIA competing schools across the nation to receive the honor.

Coverson posted career highs in kills and blocks in 2018 as a senior and is raking in honors this award season. She was named the Sooner Athletic Conference's Defensive Player of the Year Nov. 12, her second All-SAC nod in as many years. For her career, she has 256 total blocks (59 solo, 197 assists). Her 1.1 blocks per set ranks first in the conference, as well as her 121 total blocks. The conference's second leading blocker (Jessica Meyer, JBU) has 87 blocks.

"Tierra was always a huge presence for us on the court, both offensively and defensively," said Head Coach Jessica Ransom. "She is a very consistent player and the team could always count on her to come through. I am even more proud of T off the court. She has huge plans for her future to graduate and join the military. I have always admired her life plan and know she will continue to accomplish great things after volleyball."

She set in-game highs for kills (15) in a thrilling five-set victory over Southwestern Christian on Sept. 14 and on three different occasions swatted down successfully eight opponent attacks. In a season where injuries took their toll on a number of Lady Rams, Coverson played in all 122 sets of Texas Wesleyan's season, becoming only the third player to do so in the last three years ( Brianna Jaramillo, 2016 and Hannah Altman, 2017).

The stamp she has put on the program's history book - one that is filled with incredible teams and a tradition of winning and All-Americans, is profound. She becomes the first Texas Wesleyan player to lead her team in blocks in two consecutive seasons since Katie Rosenbusch did so in 2012 and 2013 - Rosenbusch had a total of 193 blocks combined in those two seasons - and her 139 blocks were the most a Lady Ram has had since Liz Meng racked up 161 in 2007.

Prior to Texas Wesleyan, Coverson was a two-time all-conference selection under the direction of Susan Moore at Cisco College...led her team to a win against Hill College, who had not lost a conference game in two years.