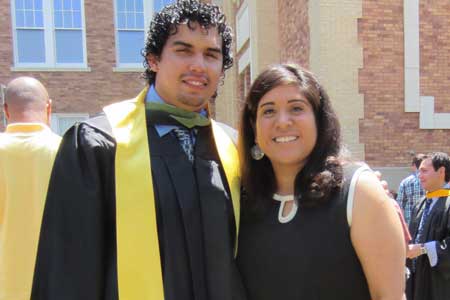 The Upward Bound Math and Science program (UBMS) proudly celebrates Ben Hernandez, the first program alumnus to graduate from Texas Wesleyan University. Ben was involved in the UBMS program for three years and graduated in May with a degree in exercise science and a minor in coaching.

UBMS is a college preparatory program, designed specifically to target those high school students interested in entering the STEM fields. UBMS and Texas Wesleyan have been in partnership for more than a decade.

As a participant of the program, Ben attended UBMS’s Summer Component, which he credits with helping him get ahead academically and navigate the college admissions process. During his time with UBMS, Ben decided that Texas Wesleyan was the perfect fit for him, as it not only offered his major, but also allowed him to have personalized attention and be closer to his mentor, UBMS director Faby Rodriguez.

Thanks to UBMS and Texas Wesleyan, the future looks bright for Ben.

He is currently preparing to marry his fiancé of two years, Gaby, this fall and will be pursuing a career as a coach working with high school youth.

Before moving on from his life as a student, Ben decided to give back to the program and university that gave him so much, and is in his second year working as a program assistant and tutor for UBMS.

UBMS and Texas Wesleyan consider Ben a success story, and congratulate him on his graduation.