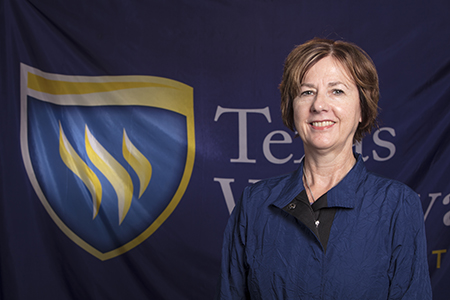 Certifications in the Republic of Ireland

Dr. "Aileen" Curtin, a native of Ireland graduated with a bachelor’s degree in education from Mary Immaculate College of Education, Limerick, Ireland in 1983.  She was a Gaelic language immersion teacher for the Department of Education, Ireland, for six years before immigrating to the United States in 1989. She taught for Kansas City Kansas Public School District and for Hurst-Euless-Bedford Independent School District until 1999. In 1996 and, while teaching for H-E-B ISD, she graduated with a Master’s Degree in Education from Texas Wesleyan University. In 1997, she was sworn in as a Naturalized United States citizen at Hurst Hills elementary in the presence of all the k-6th-grade students. In 2002 Dr. Curtin graduated from the University of North Texas with a Ph.D. in Curriculum and Instruction and Educational Administration.

Dr. Curtin joined the faculty at Texas Wesleyan University in 2000. During her time at Texas Wesleyan, she has taught undergraduate and graduate students in the school of education.  From 2008-2009, she served as the Director of the new Doctor of Education degree program. She teaches doctoral courses and chairs dissertations in the Ed.D program.  She presents annually at many conferences with doctoral students and researchers specifically in the area of immigrant and second language education, culturally responsive teaching, Celtic languages foreign language education, and early childhood education. She serves on the Southern Educational Research Association Board and mentors and co-researches with doctoral students annually at this conference. She is the author of a University textbook entitled "Practical strategies for teaching English language learners" published by Pearson education in 2009. Dr. Curtin has served as a commissioner for Hurst Civil Service Commission Board since 2004. This board serves to investigate and report on all matters relating to the enforcement of local government and civil service codes for the police and fire officers in the city of Hurst. Dr. Curtin teaches Yoga at Morton Fitness Center and enjoys practicing Yoga daily.