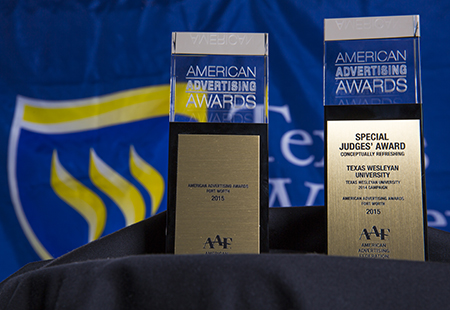 The Fort Worth chapter of the American Advertising Federation awarded Texas Wesleyan University with two gold awards and one silver award for its "Smaller. Smarter." campaign at the 2015 Addy Awards last Friday.

"We've seen the positive results of 'Smaller. Smarter.' in increased inquiries and applications from prospective students," John Veilleux, vice president of marketing & communications, said, "but to have our work recognized by our friends in the local advertising community is a true honor."

Texas Wesleyan worked with Firehouse Agency, based in Addison, on the 2014 campaign.

The win placed Texas Wesleyan among some of the biggest brands in the Dallas-Fort Worth marketplace, including Justin Boots and Cook Children's Healthcare System. Both of Texas Wesleyan's gold awards were in major event categories.

The Fort Worth ADDY Awards is the first of a three-tier national competition conducted annually by the American Advertising Federation, the advertising industry's largest and most representative competition.

Texas Wesleyan 2014-2015 advertising campaign has been its most successful in history, and includes the 60-second "When We Say Smaller" commercial, new 15-second commercials (remember the dog?), new billboards, direct mail pieces and an admissions website.

Since the rebranding of Texas Wesleyan three years ago, the University has garnered 29 marketing and advertising awards, including the Collegiate Advertising Awards and the Educational Digital Marketing Awards earlier this year. 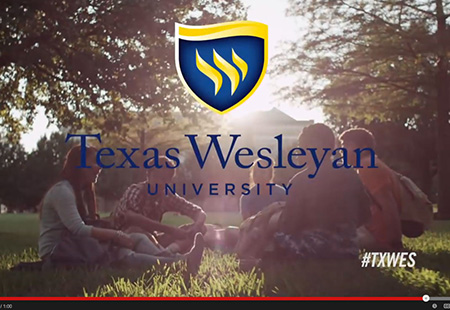