Did you go home for winter break? Catch up here on campus improvements 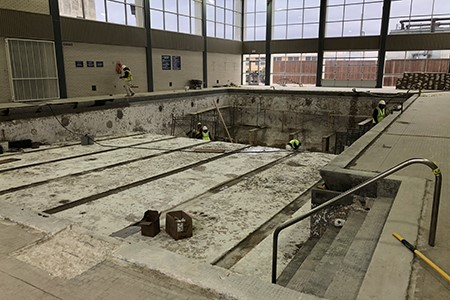 Above: The University pool in the Sid Richardson Center gets a makeover.

While students, staff and faculty were resting over the break, the TXWES facilities team was busy improving campus. Major projects included changing pipes in Dan Wagoner Hall, renovating the main entrance, pool, and gymnasium in the Sid W. Richardson Center, and working on the design plans for the upcoming Nick and Lou Martin University Center.

Renovations to the Sid

“The originally selected color of the tile for the pool was too scarce across the United States, which led to a small change in color plans,” Brian Franks, executive director of campus facilities and operations, said.

Frank’s also said the exterior improvements to the entrance are 80 percent complete. Landscaping and irrigation will be installed in early spring. Interior improvements are also 80 percent complete. The remaining pool re-plaster and re-tile, hallway drinking & bottle filling stations, and painting will be completed by early February. The pool is expected to be open to swimmers mid-February.

“Many of these campus projects including the pool and the leasing space on 3000 E. Rosedale Street are vital to not only to our personnel on campus, but also many others within the community,” Franks said. “The renovations of these major attractions will help bring in more people and further our community outreach.”

The 95 percent completed plans are set for construction and are now being submitted for permitting by the city, which is expected to be a three to four-month process. A groundbreaking ceremony will take place in April, with construction shortly to follow.

“Ben is hoping to cater to campus and even football games next year,” Franks said.

Projects that are not as obvious to the eye include the heating and cooling pipe replacement in Dan Wagoner, and switching to a high power system which fuels 80 percent of campus. Phase two of this project will take place this summer when the team will inspect gear in West Village, Dan Wagoner and other buildings of outside range.

Do you have a campus improvement idea? Fill out the Campus Improvement Idea Form here.