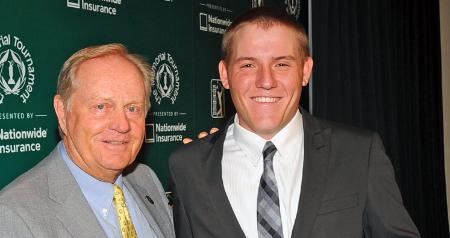 One swing of the golf club and Nathan Anderson was hooked.

The Burleson native and Texas Wesleyan junior business major says he begged his mother, Gayle, to take him golfing when he was a middle schooler. This weekend he received the Jack Nicklaus Award at the Memorial tournament in Dublin, Ohio.

“It’s pretty overwhelming,” Anderson says. “I didn’t expect it at all.”

The Golf Coaches Association of America gives the award to their “Players of the Year” in NCAA Division I, II and III, the NAIA – which Anderson won the award for – and the National Junior College Athletic Association. It’s sort of like the Heisman Award for golfers.

Anderson is incredibly affable – he converses with a laidback charm, and his easygoing tone belies a quiet knowledge of golf that many weekend hackers would kill to possess. Like many talented athletes, he makes it look easy.

It was a big year for Anderson, who had a season scoring average of 72.08, the lowest in Texas Wesleyan history. He was a NAIA PING First-Team All-American, and the Rams golf team won the Red River Athletic Conference. Anderson was one shot off the lead at this year’s NAIA National Championship.

“He has some of the best emotional management I’ve seen in college,” Bobby Cornett

Oh, and on top of that he maintained a nearly 3.5 overall GPA. Not bad at all.

Success has followed him. As a freshman, he was part of the national championship McLennan Community College team. And he’s part of a longer tradition of excellence at Texas Wesleyan. Since 1952, the school has had 79 All-Americans, 31 under legendary coach Cornett. This year alone, four players were named All-Americans. The Rams have won nine consecutive RRAC championships.

“He has some of the best emotional management I’ve seen in college,” Bobby Cornett, Texas Wesleyan head golf coach who was recently inducted into the NAIA Hall of Fame, said. “He doesn’t do one thing particularly well, but he does everything at a very high level.”

Rams Golf is a Family Affair

The Texas Wesleyan roots run deep in his family. His brother-in-law, Mitch Hendon, is a former All-American Texas Wesleyan golfer. His high school coach, Matt Dunn is a Texas Wesleyan graduate, and even his mother, Gayle, is a Ram – she works at the school in the kinesiology department.

The future is still unwritten for Anderson, who said he would like to turn pro. He still has two more semesters on the Texas Wesleyan golf team to bring home NAIA National Championship.

Anderson doesn’t seem like someone who gets to anxious, but he says, when meeting someone as big as Nicklaus, he does.