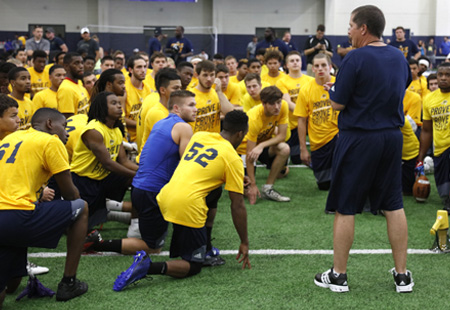 Just six months ago, head football coach Joe Prud’homme arrived on campus with a big task – to build a football program from the ground up. His first order of business – recruit 75 football players to enroll at Texas Wesleyan as part of the leadership class.

“It hasn’t been easy – but we’ve recruited a great class of sharp, well-rounded student athletes who believe in our vision and who I believe will thrive on our small campus,” Prud’homme said.

Prud’homme says they have reached their goal of recruiting 75 players for Fall 2016, but they are still welcoming more and starting their recruiting efforts for the 2017 class.

This fall’s leadership class will weight train in the University’s new athletics weight room and work on conditioning drills. During the spring semester, the players will practice and begin scrimmages. The team will compete in the NAIA, beginning Fall 2017.

“This is a level playing field – in the spring, players will compete for starting positions and scholarships,” Prud’homme said. “Everyone has a chance to prove their talents.”

Texas Wesleyan has announced that the program will have approximately 16 scholarships for football student athletes. The scholarships will be split by the coaches, so that more players will receive aid.

“Most of our guys coming in this fall have already received financial aid packages, by working closely with our Admissions team and Office of Financial Aid,” Prud’homme said.

For a University that hasn’t had a football team in 75 years, the excitement is contagious. From cheer and dance to the music department and Student Life, the entire campus community is welcoming the program and eagerly anticipating the first spring scrimmage.

Prud’homme said that he expects to release the spring scrimmage date and 2017 football schedule and location within the next month.

Until then, Rams up!